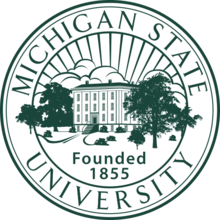 Do you work for Michigan State University?Claim the Profile

Michigan State University (MSU) is a public research university in East Lansing, Michigan, United States. MSU was founded in 1855 and served as a model for land-grant universities later created under the Morrill Act of 1862. The university was founded as the Agricultural College of the State of Michigan, one of the country's first institutions of higher education to teach scientific agriculture. After the introduction of the Morrill Act, the college became coeducational and expanded its curriculum beyond agriculture. Today, MSU is one of the largest universities in the United States (in terms of enrollment) and has approximately 552,000 living alumni worldwide.

The most popular major at Michigan State University is Business Management followed by Medical, Journalism, Social Sciences and Biomedical.

Graduation rate of college is a strong indicator of success of the college’s students in attaining their educational goals. Prepler defines graduation rate as the percentage of first-time, full-time students who graduated from Michigan State University within four or six years.