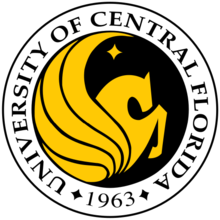 Do you work for University of Central Florida?Claim the Profile

About University of Central Florida

The University of Central Florida, or UCF, is a state university in Orlando, Florida. It has more students enrolled on campus than any other U.S. university.Founded in 1963 by the Florida Legislature, UCF opened in 1968 as Florida Technological University, with the mission of providing personnel to support the growing U.S. space program at the Kennedy Space Center and Cape Canaveral Air Force Station on Florida's Space Coast. As the school's academic scope expanded beyond engineering and technology, Florida Tech was renamed The University of Central Florida in 1978. UCF's space roots continue, as it leads the NASA Florida Space Grant Consortium. Initial enrollment was 1,948 students; enrollment today exceeds 66,000 students from 157 countries, all 50 states and Washington, D.C.Most of the student population is on the university's main campus, 13 miles (21 km) east of downtown Orlando and 35 miles (56 km) west of Cape Canaveral. The university offers more than 200 degrees through 13 colleges at 10 regional campuses in Central Florida, the Health Sciences Campus at Lake Nona, the Rosen College of Hospitality Management in south Orlando and the Center for Emerging Media in downtown Orlando. Since its founding, UCF has awarded more than 290,000 degrees, including over 50,000 graduate and professional degrees, to over 260,000 alumni worldwide.UCF is a space-grant university. Its official colors are black and gold, and the university logo is Pegasus, which "symbolizes the university's vision of limitless possibilities." The university's intercollegiate sports teams, known as the "UCF Knights" and represented by mascot Knightro, compete in NCAA Division I and the American Athletic Conference.

Out of 25 majors categories at University of Central Florida, the 5 most popular are listed below.

Graduation rate of college is a strong indicator of success of the college’s students in attaining their educational goals. Prepler defines graduation rate as the percentage of first-time, full-time students who graduated from University of Central Florida within four or six years.