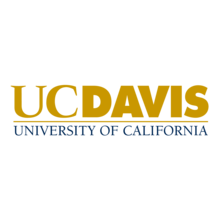 Do you work for University of California-Davis?Claim the Profile

About University of California-Davis

The University of California, Davis (also referred to as UC Davis), is a public research university and land-grant university adjacent to Davis, California. It is part of the University of California (UC) system and has the third-largest enrollment in the UC System after UCLA and UC Berkeley. The institution was founded as a branch in 1909 and became its own separate entity in 1959. It has been labeled one of the "Public Ivies", a publicly funded university considered to provide a quality of education comparable to those of the Ivy League.The Carnegie Foundation classifies UC Davis as a comprehensive doctoral research university with a medical program, and very high research activity. The UC Davis faculty includes 23 members of the National Academy of Sciences, 30 members of the American Academy of Arts and Sciences, 17 members of the American Law Institute, 14 members of the Institute of Medicine, and 14 members of the National Academy of Engineering. Among other honors, university faculty, alumni, and researchers have won the Nobel Peace Prize, Presidential Medal of Freedom, Pulitzer Prize, MacArthur Fellowship, National Medal of Science, Blue Planet Prize, and Presidential Early Career Award for Scientists and Engineers.Founded as primarily an agricultural campus, the university has expanded over the past century to include graduate and professional programs in medicine (which includes the UC Davis Medical Center), law, veterinary medicine, education, nursing, and business management, in addition to 90 research programs offered by UC Davis Graduate Studies. The UC Davis School of Veterinary Medicine is the largest in the United States and has been ranked first in the world for five consecutive year (2015-19).The UC Davis Aggies athletic teams compete in the NCAA Division I level, primarily in the Big West Conference as well as the Big Sky Conference (football only) and the Mountain Pacific Sports Federation. In its first year of full Division I status, 11 UC Davis teams qualified for NCAA post-season competition.

The most popular major at University of California-Davis is Biomedical followed by Social Sciences, Engineering, Psychology and Business Management.

Graduation rate of college is a strong indicator of success of the college’s students in attaining their educational goals. Prepler defines graduation rate as the percentage of first-time, full-time students who graduated from University of California-Davis within four or six years.