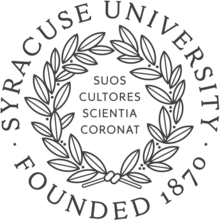 Do you work for Syracuse University?Claim the Profile

Syracuse University (commonly referred to as Syracuse, 'Cuse, or SU) is a private research university in Syracuse, New York, United States. The institution's roots can be traced to the Genesee Wesleyan Seminary (later becoming Genesee College), founded in 1831 by the Methodist Episcopal Church in Lima, New York. After several years of debate over relocating the college to Syracuse, the university was established in 1870, independent of the college. Since 1920, the university has identified itself as nonsectarian, although it maintains a relationship with The United Methodist Church.

Out of 27 majors categories at Syracuse University, the 5 most popular are listed below.

Graduation rate of college is a strong indicator of success of the college’s students in attaining their educational goals. Prepler defines graduation rate as the percentage of first-time, full-time students who graduated from Syracuse University within four or six years.