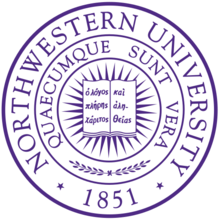 Do you work for Northwestern University?Claim the Profile

Northwestern University (NU) is a private research university based in Evanston, Illinois, with other campuses located in Chicago and Doha, Qatar, and academic programs and facilities in Washington, D.C., and San Francisco, California.

Northwestern was founded in 1851 by John Evans, for whom the city of Evanston is named, and eight other lawyers, businessmen and Methodist leaders. Its founding purpose was to serve the Northwest Territory, an area that today includes the states of Ohio, Indiana, Illinois, Michigan, Wisconsin and parts of Minnesota. Instruction began in 1855 and women were admitted in 1869. Today, the main campus is a 240-acre (97 ha) parcel in Evanston, along the shores of Lake Michigan 12 miles north of downtown Chicago. The university's law, medical, and professional schools are located on a 25-acre (10 ha) campus in Chicago's Streeterville neighborhood. In 2008, the university opened a campus in Education City, Doha, Qatar with programs in journalism and communication. In 2016, Northwestern opened its San Francisco space at 44 Montgomery St., which hosts journalism, engineering, and marketing programs.

Out of 28 majors categories at Northwestern University, the 5 most popular are listed below.

Graduation rate of college is a strong indicator of success of the college’s students in attaining their educational goals. Prepler defines graduation rate as the percentage of first-time, full-time students who graduated from Northwestern University within four or six years.