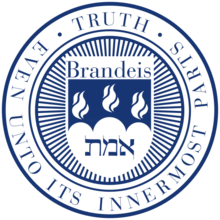 Do you work for Brandeis University?Claim the Profile

Founded in 1948 as a non-sectarian, coeducational institution sponsored by the Jewish community, Brandeis was established on the site of the former Middlesex University. The university is named after Louis Brandeis, the first Jewish Justice of the U.S Supreme Court. In 2015, it had a total enrollment of 5,532 students on its suburban campus spanning over 235 acres (95 hectares). The institution offers more than 43 majors and 46 minors, and two thirds of the undergraduate classes have 20 students or fewer. It is a member of Association of American Universities since 1985 and the Boston Consortium which allows students to cross-register to attend courses at other institutions including Boston College, Boston University and Tufts University.

Out of 19 majors categories at Brandeis University, the 5 most popular are listed below.

Graduation rate of college is a strong indicator of success of the college’s students in attaining their educational goals. Prepler defines graduation rate as the percentage of first-time, full-time students who graduated from Brandeis University within four or six years.