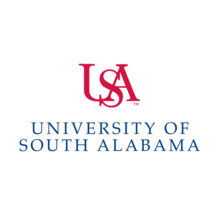 Do you work for University of South Alabama?Claim the Profile

About University of South Alabama

The University of South Alabama (USA), officially nicknamed "South" is a public, national research university in Mobile, Alabama, United States. It was created by the Alabama Legislature in May, 1963, and replaced existing extension programs operated in Mobile by the University of Alabama. With Alabama's two older universities more than 200 miles distant, the University is strategically located in the greater Mobile area, which has a population of more than a million within a 100-mile radius. Currently, USA is divided into ten colleges and schools and includes one of Alabama's two state-supported medical schools. As of the Fall semester of 2016, South Alabama has an enrollment of 16,699 students. To date, the University has awarded over 80,000 degrees. As of 2014 the university maintains a 14% graduation rate for four year courses, and was named the 8th most dangerous college in the country by Business Insider.

The most popular major at University of South Alabama is Medical followed by Education, Engineering, Business Management and Computer Sciences.

Graduation rate of college is a strong indicator of success of the college’s students in attaining their educational goals. Prepler defines graduation rate as the percentage of first-time, full-time students who graduated from University of South Alabama within four or six years.

University of Louisiana at Monroe