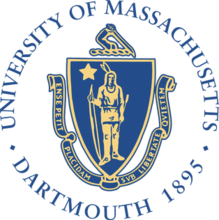 Do you work for University of Massachusetts-Dartmouth?Claim the Profile

The University of Massachusetts Dartmouth (UMass Dartmouth or UMassD) is one of five campuses and operating subdivisions of the University of Massachusetts. It is located in North Dartmouth, Massachusetts, United States, in the center of the South Coast region, between the cities of New Bedford to the east and Fall River to the west. Formerly Southeastern Massachusetts University, it was merged into the University of Massachusetts system in 1991.The campus has an overall student body of 8,647 students (school year 2016–2017), including 6,999 undergraduates and 1,648 graduate/law students. As of the 2017 academic year, UMass Dartmouth records 399 full-time faculty on staff. For the fourth consecutive year UMass Dartmouth receives top 20 national rank from President's Higher Education Community Service Honor Roll for its civic engagement.The university also includes the University of Massachusetts School of Law, as the trustees of the state's university system voted during 2004 to purchase the nearby Southern New England School of Law (SNESL), a private institution that was accredited regionally but not by the American Bar Association (ABA). UMass School of Law at Dartmouth opened its doors in September 2010, accepting all current SNESL students with a C or better average as transfer students, and achieved (provisional) ABA accreditation in June 2012. The law school achieved full accreditation in December 2016.In 2011, UMass Dartmouth became the first university in the world to have a sustainability report that met the top level of the world's most comprehensive, credible, and widely used standard (the GRI's G3.1 standard). In 2013, UMass Dartmouth became the first university in the world whose annual sustainability report achieved an A+ application level according to the Global Reporting Initiative G3.1 standard (by having the sources of data used in its annual sustainability report verified by an independent third party).

Out of 20 majors categories at University of Massachusetts-Dartmouth, the 5 most popular are listed below.

Graduation rate of college is a strong indicator of success of the college’s students in attaining their educational goals. Prepler defines graduation rate as the percentage of first-time, full-time students who graduated from University of Massachusetts-Dartmouth within four or six years.