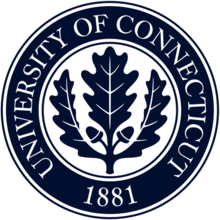 Do you work for University of Connecticut?Claim the Profile

About University of Connecticut

The University of Connecticut (UConn) was founded in 1881 and is a public land grant, National Sea Grant and National Space Grant research university in Storrs, Connecticut, United States.

The primary 4,400-acre (17.8 km2) campus is approximately a half hour's drive from Hartford and 90 minutes from the global city of Boston. It is a flagship university that is ranked as the best public national university in New England and is tied for No. 18 in Top Public Schools and No. 56 in National Universities in the 2018 U.S. News & World Report rankings. UConn has been ranked by Money Magazine and Princeton Review top 18th in value. The university is designated "R-1: Doctoral Universities – Highest Research Activity" with the Carnegie Classification of Institutions of Higher Education classifying the student body as "More Selective", its most selective admissions category. The university has been recognized as a Public Ivy, defined as a select group of publicly-funded universities considered to provide a quality of education comparable to those of the Ivy League.

The most popular major at University of Connecticut is Business Management followed by Medical, Engineering, Social Sciences and Biomedical.

Graduation rate of college is a strong indicator of success of the college’s students in attaining their educational goals. Prepler defines graduation rate as the percentage of first-time, full-time students who graduated from University of Connecticut within four or six years.