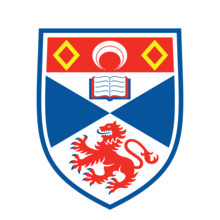 Do you work for St. Andrews University?Claim the Profile

The University of St Andrews (Scots: University o St Andras; abbreviated as St And, from the Latin Sancti Andreae, in post-nominals) is a public university in St Andrews, Fife, Scotland. It is the oldest of the four ancient universities of Scotland and, following Oxford and Cambridge universities, the third-oldest university in the United Kingdom and English-speaking world in general. St Andrews was founded in 1413 when the Avignon Antipope Benedict XIII issued a papal bull to a small founding group of Augustinian clergy.

The most popular major at St. Andrews University is Business Management followed by Education, Biomedical, Psychology and Parks & Recreation.

Graduation rate of college is a strong indicator of success of the college’s students in attaining their educational goals. Prepler defines graduation rate as the percentage of first-time, full-time students who graduated from St. Andrews University within four or six years.