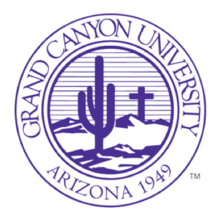 Do you work for Grand Canyon University?Claim the Profile

Grand Canyon University (commonly referred to as GCU or Grand Canyon) is a for-profit Christian university in Phoenix, Arizona, in the United States.

Out of 19 majors categories at Grand Canyon University, the 5 most popular are listed below.

Graduation rate of college is a strong indicator of success of the college’s students in attaining their educational goals. Prepler defines graduation rate as the percentage of first-time, full-time students who graduated from Grand Canyon University within four or six years.