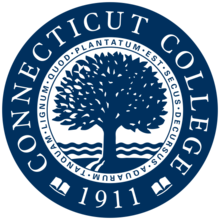 Do you work for Connecticut College?Claim the Profile

Connecticut College (Conn College or Conn) is a private liberal arts college located in New London, Connecticut. It is a primarily residential, four-year undergraduate institution, with nearly all of its approximately 1,900 students living on campus. Students choose courses from 41 majors, including an interdisciplinary, self-designed major. The college was founded in 1911 as "Connecticut College for Women" in response to Wesleyan University closing its doors to women in 1909; it shortened its name to "Connecticut College" in 1969 when it began admitting men.

The most popular major at Connecticut College is Social Sciences followed by Biomedical, Visual/Performing Arts, Psychology and Cultural/Group Studies.

Graduation rate of college is a strong indicator of success of the college’s students in attaining their educational goals. Prepler defines graduation rate as the percentage of first-time, full-time students who graduated from Connecticut College within four or six years.

College of the Holy Cross