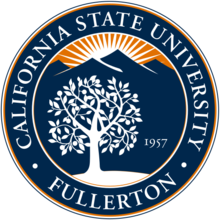 Do you work for California State University-Fullerton?Claim the Profile

California State University, Fullerton (CSUF or Cal State Fullerton) is a public university in Fullerton, California. With a total enrollment of about 40,400, it has the largest student body of the 23-campus California State University (CSU) system, and its approximately 5,800 graduate student body is also the largest in the CSU and one of the largest in all of California. As of Fall 2016, the school had 2,083 faculty, of which 782 were on the tenure track.The university offers 109 degrees: 57 bachelor's degrees and 52 graduate degrees, including three doctorates.CSUF is designated as a Hispanic-serving institution and eligible to be designated as an Asian American Native American Pacific Islander serving institution (AANAPISI). The university is nationally accredited in art, athletic training, business, chemistry, communications, communicative disorders, computer science, dance, engineering, music, nursing, public administration, public health, social work, teacher education and theater. Spending related to CSUF generates an impact of around $2.26 billion to the California and local economy, and sustains nearly 16,000 jobs statewide.CSUF athletic teams compete in Division I of the NCAA and are collectively known as the CSUF Titans. They compete in the Big West Conference.

Out of 23 majors categories at California State University-Fullerton, the 5 most popular are listed below.

Graduation rate of college is a strong indicator of success of the college’s students in attaining their educational goals. Prepler defines graduation rate as the percentage of first-time, full-time students who graduated from California State University-Fullerton within four or six years.