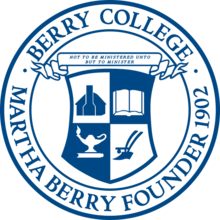 Do you work for Berry College?Claim the Profile

Berry College is a private, four-year liberal arts college located in Mount Berry, Floyd County, Georgia, United States, just north of Rome. It is accredited by the Southern Association of Colleges and Schools (SACS). Berry was founded in 1902 by Martha Berry. With 27,000 acres (110 km2), Berry College boasts the largest contiguous campus in the world. College leaders from across the country chose Berry College as the nation's number one "Up-And-Coming" liberal arts college, according to the 2014 U.S. News Best Colleges rankings released September 10, 2013.

The most popular major at Berry College is Business Management followed by Education, Biomedical, Psychology and Journalism.

Graduation rate of college is a strong indicator of success of the college’s students in attaining their educational goals. Prepler defines graduation rate as the percentage of first-time, full-time students who graduated from Berry College within four or six years.